On Wednesday 18 November, WAMGLTA was invited to attend the 2020 PTCWA Showcase Celebration Event at the State Library Theatre in Northbridge. The event was attended by numerous associations, including WAMGLTA, which was represented by its Chairperson, Dr Angela Evangelinou-Yiannakis; Secretary, Ms Maria Svarnou; and Executive Committee Member, Ms Nina Battalis.

During the course of the evening, WAMGLTA was introduced to the other associations via a brief PowerPoint Presentation and outline of its main objectives. WAMGLTA was then acknowledged with a certificate for being an “Outstanding PTCWA Member Professional Association”. 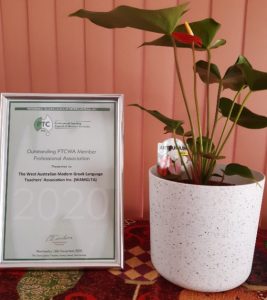 On Saturday 28 November, WAMGLTA, as a new member of the Modern Language Teachers’ Association of Western Australian, was invited to attend the MLTAWA Annual General Meeting (AGM), followed by the 90th Birthday Celebratory Event, both held at the Esplanade Hotel in Fremantle. The MLTAWA is the oldest Language Association and the oldest Learning Area Association in Australia! Its first meeting was held at the UWA premises in Irwin Street, Perth, in 1930, and it has continued to be the peak body advocating for languages since.

The AGM was attended by all the Language Associations, including WAMGLTA, which was represented by its Chairperson, Dr Angela Evangelinou-Yiannakis; and later by its Secretary, Ms Maria Svarnou.
WAMGLTA was welcomed officially to the MLTAWA at the AGM, being one of two new members of the umbrella association.

Later, in the follow-up celebration for the 90th Birthday of MLTAWA, WAMGLTA was warmly welcomed once again, this time in the presence of many dignitaries and guests, including WA Minister for Education and Training, the Honourable Sue Ellery MLC; and the Honourable Consul of Greece, Mrs Georgia Karasiotou.

A highlight of the 90th Birthday celebrations was the singing of the ‘Happy Birthday’ song in all the member languages, including Modern Greek where ten Year 8 students of St. Andrew’s Grammar wished MLTAWA ‘Happy Birthday!’ in Greek with the words: “ΧΡΟΝΙΑ ΠΟΛΛΑ, MLTAWA! ΝΑ ΤΑ ΕΚΑΤΟΣΤΗΣΕΙΣ!” Thanks are extended to Mrs Katerina Reklitis for preparing the students, whose voices were recorded specifically for this event.

As a relatively new association, WAMGLTA has made its mark, establishing itself as a worthy member of two peak associations in WA.