Paradise 4 Kids (P4K) is a non-profit organisation that supports Father Themi in his mission to duly provide for the many people in need of assistance.

It was first established in Australia as a branch from a charity based on the Gold Coast, Paradise Kids. It was formed primarily to fund and support the works of Father Themi in Africa and to also assist other missionaries in their calling from God.

Now, with committees all around the world made up of dedicated Christians in the Orthodox Church and in other Churches, P4K have set themselves apart by being an entirely voluntary organisation with no one receiving any remuneration, (not even Father Themi), and by funding its outreach to other missions and anyone else who will listen.

PK4A & P4K are full volunteer organisations raising funds for Faith, Food and Education in the poorest nations on Earth. We sponsor missionaries recommended to us by Orthodox Monk Rev Themi Adamopoulo, who has served in Africa for over 20 years from the East Coast to the West Coast. Rev Themi’s mission is to preach the Gospel of Jesus Christ and to meet the human needs, in the name of Jesus and through the love of Jesus without discrimination.

On average, 97.25% of all funds collected for Appoved Grants are sent to Africa to be dispersed by Rev Themi.
PK4A & P4K pay no salaries, have no staff, operate no offices, own no property, with all work and workers being voluntary.

In the United States approved Grants and Tax deductions are issued as directed by IRS rules and regulations under…..
Paradise 4 Kids INC with a 501(c) (3) Tax exempt Status of the IRS. 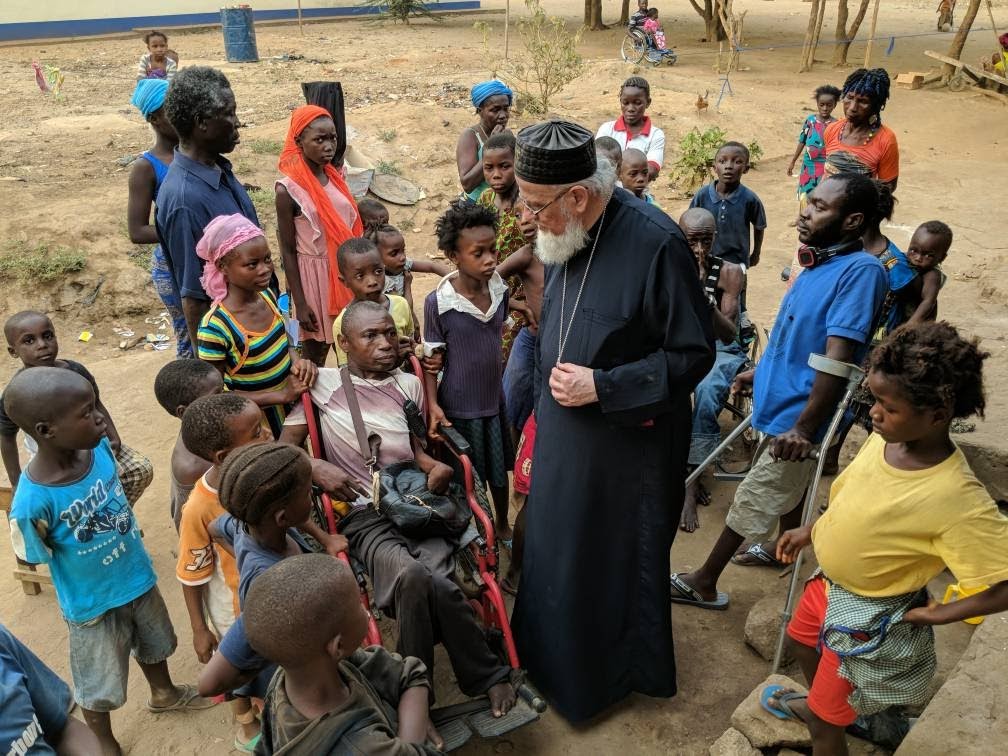 Themistocles Adamopoulo was born in Alexandria, Egypt in 1945. His family migrated to Melbourne, Australia in 1957.

From the 1980s through 1990s Themi was a scholar. He graduated from Holy Cross Seminary in Boston. He received a Ph.D. in Theology from Brown University and studied ancient languages at Princeton and Harvard. Themi became one of the world’s foremost Biblical scholars. He learned to read and speak Hebrew and mastered the Greek, French and Aramaic languages as well. Seemingly settled into a distinguished career as a Biblical scholar, Themi was teaching at an Orthodox Seminary in Sydney, Australia when he felt the Lord leading him in another direction.

An admirer of Mother Teresa, Themi came to believe that his calling was to serve the poor. In 1999 Themi asked to be transferred to Africa to become a missionary and the Orthodox Patriarch in Alexandria granted his request. After being ordained as a priest, the now “Rev Themi” served at the Orthodox Seminary in Nairobi until 2007 when he decided to take on a new challenge, to create a brand new Orthodox Mission in Sierra Leone.

Father Themi Adamopoulo, or as we call him “Rev Themi”, is an Orthodox Monk. Being a man of God, Rev Themi sold everything he had, gave it to the poor and followed Jesus into a world of poverty, affliction and oppression; a world of widows, orphans and the disabled; a world of the hungry, the sick, those in jail and those forgotten.

In the 1990s, he felt a call from God to go into the world and preach the Gospel. This calling led him to Nairobi, Kenya. During his time in Nairobi, Rev Themi oversaw the development of several educational facilities for the poor that provided free education, food and clothing for children. He ventured outside into the slums and became what others called him “An Apostle to the Poor & Oppressed”.

Every year, Rev Themi would return to his home city of Melbourne, Australia for one month of rest & relaxation, but instead of “taking it easy” he worked even harder raising awareness of the poor and raising funds for the projects he had undertook. During these visits, many of his friends and supporters would offer their assistance to him in whatever way they could. It was during these early days, that the beginnings of Paradise 4 Kids (P4K) began to form.

In mid 2007, whilst working in Kenya, the Orthodox Patriarch of Alexandria invited Rev Themi to commence a new mission of his choice, moving from Kenya to Sierra Leone in early 2008 (considered the poorest country in the world at the time). 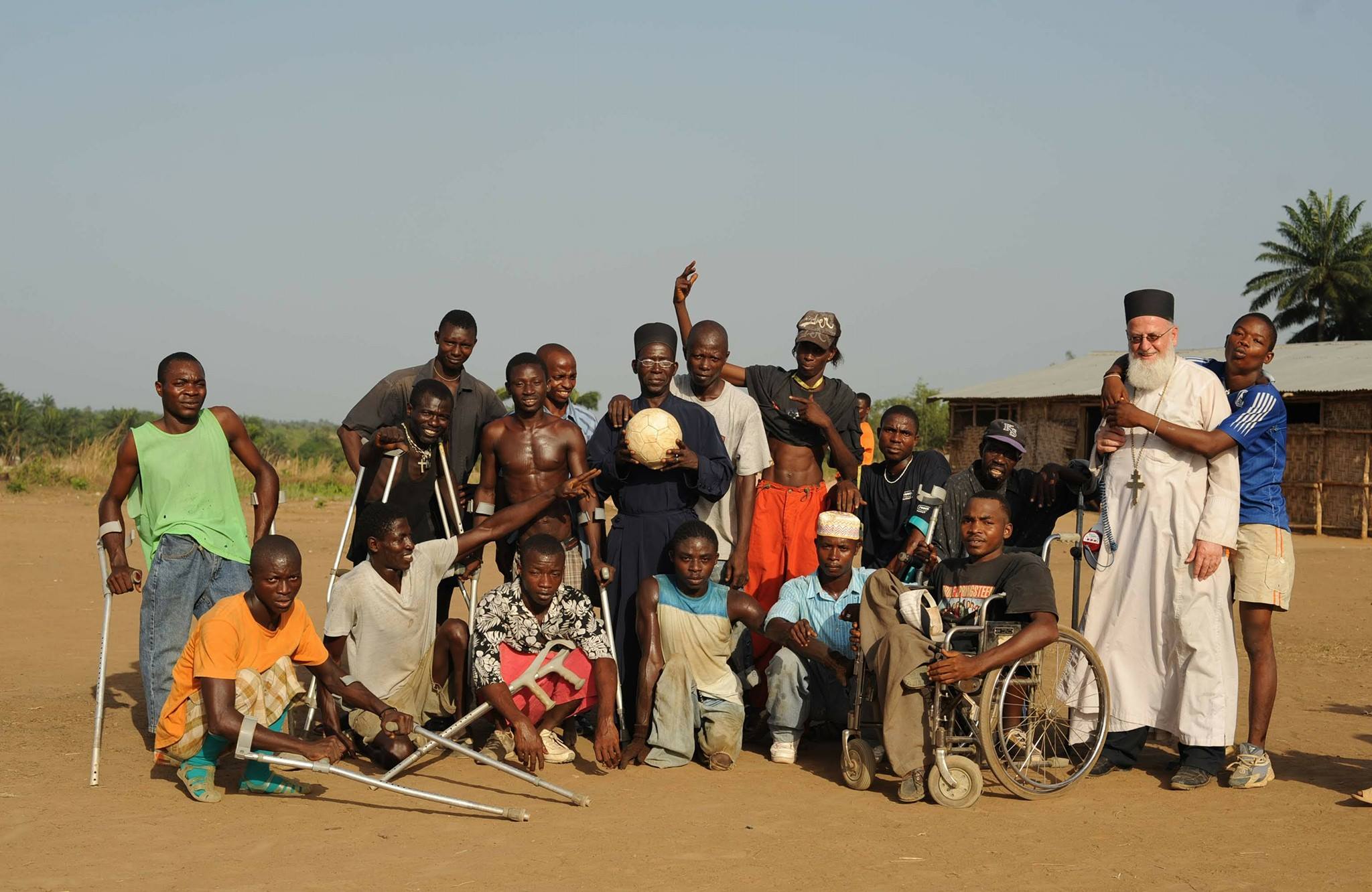 The Holy Orthodox Mission in Sierra Leone is an outpost of Light in a place that has suffered through the darkness of civil war, poverty and most recently the scourge of Ebola. Through all these trials Rev Themi has been there doing Christ’s work – giving drink to the thirsty, food to the hungry, clothing to the naked and comfort to the sick.

P4K was first established in Australia to help Rev Themi in his calling from God. It is now made up of committees all around the world, made up of dedicated individuals who have set themselves apart by being a totally voluntary organisation – not one person receives any remuneration, not even Rev Themi.

To donate to P4K and help support Rev Themi in his mission, there are various options available.

Start by heading over to the Paradise4Kids website. where an Ezi Donate form can be filled out securely online. Just follow the ‘How to Donate’ link and select ‘Online Donation’.

Alternatively, download, print and fill out the form by hand. Then fax to the number on the form, or scan and email to the email address.

Or just complete a form and hand it in to a P4K representative at an event. Check their website for events in your local area.

Support a worthy cause and help to make a difference.