Trust in the Lord with all your heart, and lean not on your own understanding

Our Church is a place for you if you are looking for true meaning and purpose in your life.

A note from the Priest…

I would like to welcome you to our Church. If you are new to Perth or visiting the Church for the first time please feel free to introduce yourself to me.

You are most welcome to join us in the parish hall after the Sunday service for tea and coffee and fellowship.

In all your ways acknowledge Him, and He shall direct your paths

Holy Trinity
God is one in substance and Triune in three Persons or Hypostases; the Father, the Son, and the Holy Spirit, who proceeds only from the Father

The Incarnation of Christ
'Who for us men and for our salvation came down from Heaven, and was incarnated by the Holy Spirit and of the Virgin Mary, and became Man" (Nicene Creed)

Holy Eucharist
Entering into communion with God, through the partaking of bread and wine, transformed for us into the actual Body and Blood of Christ, through the intervention of the Holy Spirit

Holy Scripture & Holy Tradition
The Holy Bible - A collection of holy books containing the Word of God, interpreted by the Church as guided by the Holy Spirit, taught by those in authority and studied by all

Holy Church
"In One Holy, Catholic and Apostolic Church" (Nicene Creed)
In this we mean that the one, holy, and apostolic Church is "whole, complete, and lacking in nothing." We are the Orthodox Church.

Synergy
The incorporation of man into Christ, and his union with God, that requires the cooperation of two unequal, but equally necessary forces: Divine Grace and human will

You also, as living stones, are being built up a spiritual house, a holy priesthood, to offer up spiritual sacrifices acceptable to God through Jesus Christ 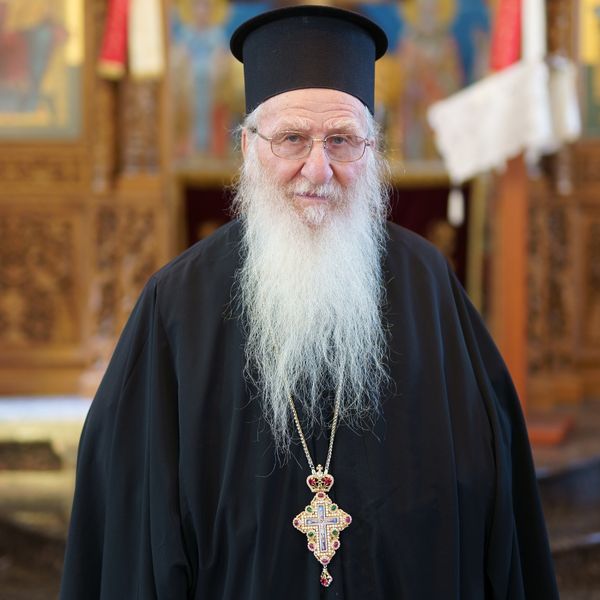 Father Theoklitos arrived in WA during December 1982. He would serve at Evangelismos until mid 1996, after which he was transferred to Sts Constantine and Helene. He later went back to Greece, and spent several years nurturing a parish there, after which, following his heart, he returned to us at the end of 2018.
He now joins Father Emmanuel at our Parish of the Annunciation of Our Lady.

The Annunciation of Our Lady the Theotokos

The Angel Gabriel announces to the Virgin Mary that she will bear a Son, Jesus Christ, who will save humanity

Now in the sixth month the angel Gabriel was sent by God to a city of Galilee named Nazareth, to a virgin betrothed to a man whose name was Joseph, of the house of David. The virgin’s name was Mary. And having come in, the angel said to her, ‘Rejoice, highly favoured one, the Lord is with you; blessed are you among women!’

But when she saw him, she was troubled at his saying, and considered what manner of greeting this was. Then the angel said to her, ‘Do not be afraid, Mary, for you have found favour with God. And behold, you will conceive in your womb and bring forth a Son, and shall call His name Jesus. He will be great, and will be called the Son of the Highest; and the Lord God will give Him the throne of His father David. And He will reign over the house of Jacob forever, and of His kingdom there will be no end.’

Then Mary said to the angel, ‘How can this be, since I do not know a man?’

And the angel answered and said to her, ‘The Holy Spirit will come upon you, and the power of the Highest will overshadow you; therefore, also, that Holy One who is to be born will be called the Son of God. Now indeed, Elizabeth your relative has also conceived a son in her old age; and this is now the sixth month for her who was called barren. For with God nothing will be impossible.’

Then Mary said, ‘Behold the maidservant of the Lord! Let it be to me according to your word.’ And the angel departed from her.

Now Mary arose in those days and went into the hill country with haste, to a city of Judah, and entered the house of Zacharias and greeted Elizabeth. And it happened, when Elizabeth heard the greeting of Mary, that the babe leaped in her womb; and Elizabeth was filled with the Holy Spirit. Then she spoke out with a loud voice and said, ‘Blessed are you among women, and blessed is the fruit of your womb! But why is this granted to me, that the mother of my Lord should come to me? For indeed, as son as the voice of your greeting sounded in my ears, the babe leaped in my womb for joy. Blessed is she who believed, for there will be a fulfilment of those things which were told her from the Lord.’

And Mary said:
‘My soul magnifies the Lord,
And my spirit has rejoiced in God my Saviour.
For He has regarded the lowly state of His maidservant;
For behold, henceforth all generations will call me blessed.
For He who is mighty has done great things for me,
And holy is His name.
And His mercy is on those who fear Him
From generation to generation.
He has shown strength with His arm;
He has scattered the proud in the imagination of their hearts.
He has put down the mighty from their thrones,
And exalted the lowly.
He has filled the hungry with good things,
And the rich He has sent away empty.
He has helped His servant Israel,
In remembrance of His mercy,
As He spoke to our fathers,
To Abraham and to his seed forever.’