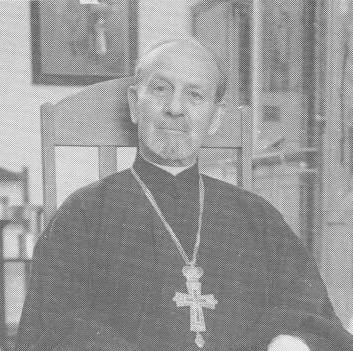 Written by John N. Yiannakis
This article was published in Australian Dictionary of Biography, Volume 15, (MUP), 2000

Christophoros Manessis (1898-1980), Greek Orthodox priest, was born on 1 August 1898 at Kallimasia on the Aegean island of Khíos, Greece, eldest son of Constantine Manessis, farmer, and his wife Maria, née Boyatzis. Christophoros was a competent and lively schoolboy. He served in the Greek army during World War I and continued as a non-commissioned officer until he was discharged in August 1923. Deciding to emigrate to Australia, he reached Melbourne in the Ville de Metz on 10 April 1924. Manessis eventually found a job in the smelting works at Port Pirie, South Australia, and made friends with some of the Greeks who worked there. On 18 November 1925 at St Paul’s Anglican Church, Port Pirie, he married Evangelia Spartalis; she was aged 21 and came from Kastellorizon (Megisti), Greece.

A deeply religious man, Manessis had for many years studied ‘ecclesiastical and theological books’. In Melbourne, he was ordained priest on 6 December 1925 by Bishop Knetes; he returned to take up his appointment ‘as rector of the Greek Orthodox Community of Port Pirie, all of South Australia and Broken Hill’. The relocation of Archimandrite Germanos Illiou to South Australia and the diminishing Greek Orthodox population at Port Pirie led to his transfer to Perth in 1926. Manessis performed his religious duties in the Hellenic Hall before a Greek Orthodox church was built. His humble nature and concern for his parishioners contributed to his success and popularity as a priest, and helped to unite the local community.

With the completion and consecration of the Church of St Constantine and St Helene at Northbridge in 1937, Manessis was installed as its priest. He played an important role in spiritual and community activities, assisting fund-raising ventures, advising his parishioners on various matters and teaching at the local Greek school. To bring comfort to the scattered Greek population, he travelled throughout the State, notably to the goldfields and the south-west. In 1943-44 he was a part-time chaplain in the Australian Military Forces and was attached to the army camp at Melville.

Manessis also worked closely with representatives of other religious denominations, particularly Anglican and Catholic clergymen. In 1955 he was involved in a dispute with a number of influential Greeks over the provision of services to country communities and the suggestion that a second Greek Orthodox priest be ordained to lessen his workload. Dismissed from his duties, he moved to Melbourne where he was appointed a relieving priest.

On his return to Western Australia in 1957 he found a second Greek Orthodox church under consideration. In December 1958 Manessis became foundation priest at the Annunciation of Our Lady (Evangelismos) Church, West Perth. From the early 1970s he shared his religious duties with another priest. Manessis retired in 1975. Survived by his wife, four sons and three daughters, he died on 7 June 1980 in his home at Wembley and was buried in Karrakatta cemetery.

This article was first published in hardcopy in Australian Dictionary of Biography, Volume 15, (MUP), 2000