On the 27th May 2021 in the spacious Boardroom of Jackson McDonald the Battle of Crete Memorial Committee of WA (BCMC) unveiled their concept design for a memorial to the 1941 Battle of Crete. The memorial, to be located within the Saw Avenue precinct at Perth’s King’s Park, will commemorate the courage, sacrifice and commitment of those who served and endured the battle. In particular, Australian service personnel with direct links to Western Australia and the people of Crete, who on so many occasions risked their lives to assist them.

The proposed memorial has received support from the Federal and State Governments as well as the RSL WA. In principle support for the project has also been received from the Botanic Gardens and Parks Authority (BGPA) who are responsible for Kings Park. Prominent WA artists Smith Sculptors have been chosen to develop the design. The BCMC has also partnered with the National Trust (WA) who have acknowledged the project as a worthy one and have set up a donations section under the heading ‘Battle of Crete Memorial Fund’ on their website. Donations made through this avenue are fully tax deductible. This was an important partnership to help make this memorial a reality.

Basil Georgiou, senior partner with Jackson McDonald, welcomed the invited guests before Mr Bill Evangel, the President of the Greek Australian RSL WA and Chair of the BCMC said a few words about the origins of the Committee and its achievements to date. Major (retired) Mike McDonald then gave an informative overview of the Battle of Crete before unveiling the preferred design. A design that was well received by those in attendance, which included special guests the Hon Colin deGrussa MLC Shadow Min for Veterans Affairs, His Grace Bishop Elpidios of Kyaneon, The Chief Justice of WA Peter Quinlan SC, Judge Stephen Lemonis, the Consul of Greece Ms Karasiotou, former Governor of WA and BCMC member, Dr Ken Michael AC, Battle of Crete veteran Arthur Leggett (aged 102), representatives of the armed services as well as many leaders of Hellenic organisations.

Bishop Elpidios then addressed the gathering reading a message from His Eminence Archbishop Makarios, Primate of the Greek Orthodox Church of Australia, one of the patrons of the BCMC. The final speaker was Mr Richard Sandover, the other BCMC patron. His uncle was Major Ray Sandover, the Commanding Officer of the 2nd/11th Battalion on Crete.

The proposed memorial design, developed by SmithSculptors, is based on a ‘broken column’ made of polished marble, a symbol from the Greek tradition that signifies a young life cut short, often in battle. At the base of the column is to be backed by polished granite and will feature four bronze figures in relief. Three of the figures are military, one civilian. At the front of the memorial facing North, the direction that the enemy had come from in the battle is the relief based on the image of an Australian ‘Digger’ of the 2nd / 11th Battalion circa 1941. To his left, is a relief based on the image of a Greek soldier. Facing to the west, this image symbolises the enduring bonds of friendship between the Greek and Australian people. Facing to the south, is an image in relief of a Royal Australian Navy Rating (sailor). This Sailor will be depicted wearing a cap tab for HMAS PERTH. The location of this relief, symbolises the fact that the British Naval forces operating around Crete, including the HMAS PERTH, HMAS NAPIER and HMAS NIZAM, ‘covered the backs’ of the soldiers fighting on land. To the right of the Digger, facing east, will be a relief depicting a Cretan female civilian. This image acknowledges the role played and the price paid by the civilians of Crete during the battle and subsequent German occupation. It recognizes that women experience some of the worst aspects of war, but they are often the glue that holds families together. The relief faces east and greets the dawn with hope of better days to come. The circular stepped base of the memorial will be of non-slip polished granite and the colour is envisaged to depict the light of the Cretan daytime sky. Around the edge of the base will be an inlaid wreath of inter-twined eucalyptus leaves in green and brown. The word ‘eucalypt’ also has a Greek origin. The base of the memorial will also contain a map of the island of Crete and an information podium clad in polished granite, capable of containing several A3 sized bronze plaques to carry information about the battle.

The evening was an enormous success with all those present leaving the event in a very enthusiastic frame of mind with positive messages of support for the project.

Readers may obtain further information from the following websites battleofcrete.org.au and nationaltrust.org.au
We are also on Facebook: facebook.com/battleofcretememorialcommitteeWA 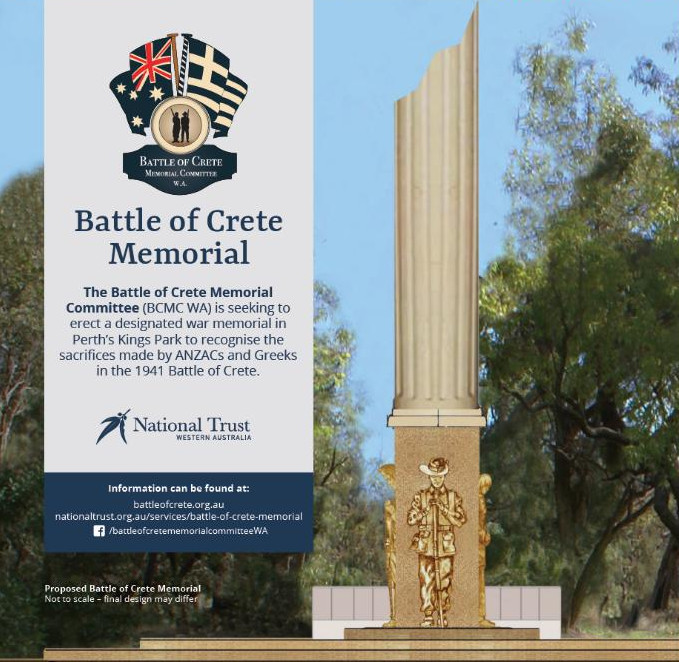